Sorting numbers within a JavaScript array

You need to sort this JavaScript array in numeric order:

Arrays have a sort method, so lets try using that

The output from running this in Chrome 67 is that the array is now sorted as:

Which is not what we want, the number 11 is in the wrong place.

This result is produced because using the JavaScript sort() without a compare method array causes elements to be sorted by converting them to strings and comparing strings in Unicode code point order. 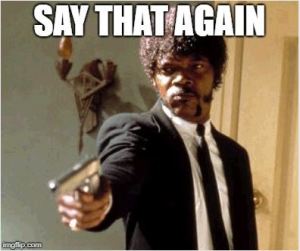 Apologies! That was a bit opaque so lets take that last paragraph apart. The sort method first converts the numbers to strings so we conceptually have

The compare function should return a number. That number will be  used to determine which of a or b comes first.

If the compare function returns zero, the a and b should remain in the same order

Shown below is an example of anonymous compare function:

This function can then be passed to the sort() method as shown below. The calls to console.log are instrumentation that you can use to see what is going during each of the three times the compare function is invoked.

Pasting this into the Chrome console window will produce the following output: 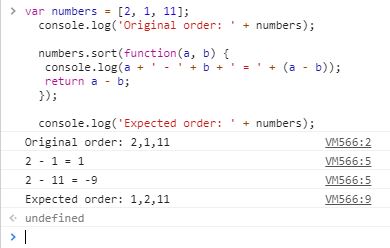 Stepping through the output, first displayed is the array in it’s original order.

The final line shows the results of the sort and now the numbers are sorted as expected.

This site uses Akismet to reduce spam. Learn how your comment data is processed. 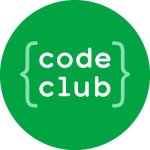